Points of Interest are locations on the map, either officially or colloquially named, that are key to certain quests or have unique dialog or interactions.

Grandma's Cabin is the location where the player begins their journey. More information on it's dedicated page.

Dead Lake is a location in the Western Creek region of the map.

The Hand Shaped Island is a unique Island in the Willows Beach region of the map. It's part of the "Find the treasure" quest.

The Shovel for "Find a Royal Nose for the Snowman"

The Abandoned Mining Site is a location in the Pilgrim's Peak region of the map. As of 1.0.7 there are no quests related to the location, but there is a repairable sign and some collectible resources in the area.

The canyon is located in the center of the map, directly Northwest of Black Tower campsite. It is part of the Turtle Rock region and is home to a few collectable resources as well as a repairable street light. Its southern entrance is an old drawbridge. The canyon has unique, windy audio and is the only location where the camera changes to a completely top-down view.

The southern entrance of the canyon

The repairable street light in the canyon

The Wishing Well is a small well located in Wishing Well campsite. There is a unique interaction the player can have with the well, outlined on it's dedicated page.

Making a wish at the Wishing Well

The broken car is a small red car that can be found Northeast of the Wishing Well campsite. The car can not move but the playing can honk it's horn. There are also a few collectible resources found on and around it.

Yellowfields Town is a small town on a hill in the Yellowfields region of the map, North of Yellowfields campsite. It contains several buildings, some of which with mail boxes in front with the names of the people who live there. The town's center has a pair of benches, a street light, some garlands, and a set of flower pots. There is also a small hill with a bridge leading to it that has a bench on it. There are several repairable items located in and around the town, including a fence, a street light, and a direction sign.

Repairable Street Light at the northern end of Yellowfields Town

The cable car is a vehicle that is broken until the player fixes it as part of the "Fix the cable car" quest. Fixing the cable car is required if the players wants to finish the main story. It has two rideable cars that the player can enter in order to be brought up the cliff where Turtle Rock is located.

The Cable Car, before being repaired

A view from the Cable Car

The reservoir (unofficial name) is a location in the Turtle Rock region, just South of the upper portion of the cable car. There are no quests associated with the area, however it is a good place for farming fireflies at night.

A view of the Reservoir from the Balloon

Fireflies spawning at the reservior

The Turtle Rock is a large rock formation in Turtle Rock campsite. It has a repairable sign in front of it, which explains the rock's history.

Turtle Rock. This massive rock formation comes from the mountains. It was pushed for thousands of years by a glacier during the ice age. Now, it rests here after its long journey.

Mr. Berd's House is a building located in the Old Castle region, West of the rope bridge. It is a key location in the "Bring the letter to Mr. Berd" quest. There is a repairable torch nearby, as well as one of the 5 Snow Flowers.

The repairable torch, next to Mr. Berd's House.

The Chapel of the Pilgrim

The Chapel of the Pilgrim is a building located in the Pilgrim's Peak region. It is the site of the final cutscene of the game as well as where the player gains access to the hot air balloon.

The Chapel of the Pilgrim

Flint and Grandma at The Chapel of the Pilgrim 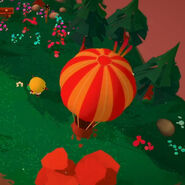